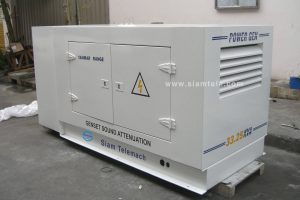 Diesel generating sets are used in places without connection to the power grids, as emergency power-supply if the grid fails, as well as for more complex applications such as peak-lopping, grid support and export to the power grid. Sizing of diesel generators is critical to avoid low-load or a shortage of power and is complicated by modern electronics, specifically non-linear loads. An engine-generator is the combination of an electrical generator and an engine mounted together to form a single piece of self-contained equipment.

The packaged combination of a diesel engine, an alternator and various ancillary devices - such as base, canopy, sound attenuation, control systems, circuit breakers, jacket water heaters and starting system, is referred to as a "Generator Set" or a "Gen Set" for short.

Diesel generators, sometimes as small as 200 kW (250 kVA) are widely used not only for emergency power, but also many have a secondary function of feeding power to utility grids either during peak periods, or periods when there is a shortage of large power generators.